Baur rebuildathon - ON THE ROAD

im guna be busy the next three weekends. dropping the kids off at me mums in linconshire this weekend then picking them up the next weekend and going to ingamels for a week after that.

I'll sort the steering joint and exhaust mount tomorrow, easy jobs. Fiddle with brake switch isn't hard. On thinking about the number plate lights I screwed them in, but don't recall connecting up the wires. As to the brakes I will have a look and see what the score is - I suspect it's vacuum related as part of the booster hose is very tatty. If the booster is knackered I have a spare. rear brake not working - maybe that's where the air is!

Steering joint had a bolt in it, just not fully tightened and no locknut on. Perfectly OK as it was although makes MOT man unhappy.
Modified the exhaust mount, I now have a nasty rattle - more fettling needed. Also tightened up the bolts on the rear joints, think the leak is fixed.
Changed OSR brake cylinder, brakes seem a lot better although pedal still feels very soft compared to my focus, might have to try the pedal of Arshad's car at the weekend to compare. Suspect there's still some air in the system.
Number plate lights - rusty terminal on one where it's meant to earth to the bumper, the other looked fine but still wouldn't earth. Strands of copper wire looped through and squished against the bumper by the body of the light did the trick.
Brake lights - fitted return spring to pedal, switch now working properly!
Fuel gauge was AWOL, pulled out seat and cover to find one of the wires had disconnected itself. Pulled that bit of loom out to the passenger door and applied some solder to fix it.
Car kept cutting out - dodgy fuel pump relay, then I found that the connectors to the pump itself were very loose - on at least the third car as they came with a pump which I fitted to the slug then took out and used in the Baur. I put a small piece of solder wire inside the socket bits and pushed them onto the pins - nice and snug now.

Clutch is still odd, bites very close to the floor but seems better after I drive it around a bit - needs proper bleeding I suspect.

Just need to do the fog light bulb, then it's try again at MOT time. I think I'll take it to Bluebell and let them check everything over again, Steve there should be able to understand a motronic 325i hiding in an E21. Speak to him on Monday.

The engine definitely isn't a 323i, in fact having smoked the tyres in the yard today I wonder what it actually is - this car is going to be very fast. After some thought around this, I also stuck the 320 badges back on

It looks like a high comp 325i, but when you stomp the loud pedal it behaves like a beast! Be nice if it turned out to be something even better inside.

I have nothing to compare to - long time since I drove a 6 pot BMW (or anything particularly powerful, slug being on the lower end of the track car scale), all I know is that it seems very fast. I sat stationary with the wheels spinning today, will be an easy donut mobile! MIght have to do a comparison with Arshads car power wise if he comes over this weekend. Drag racing in the workshop yard!

tbh id swap your track car engine with it and enjoy...... weld the diff up.....
get them spinning up in first then step it up into second, rev it up til its reading 45mph on the speedo still with your left foot on the brake holding you stationary.... (dont think youd be able to do this with rear discs?). with a bit of lock on just let go of the brake briefly then feather it while going round in circles without leting it drop below 4k ...... good smokey dohnuts.

MOT passed today, working tomorrow so will collect certificate Saturday AM, get a tax disc and drive it around a bit. May have to do some exhaust modding as the rattle was annoying, but it is road legal for the first time since I got it, in fact since 2004!
1983 316 Pustergrun - track sluG!
1982 Saphirblau Baur 325i

well done. Another baur on the road

Baur rebuildathon - ON THE ROAD

Well it's now on the road. Brakes bled and working fine. Feels a bit odd, but only having driven my boring focus TDCi and the slug recently I can barely remember what an E21 feels like (slug isn't a normal E21!).

Exhaust rattle is the propshaft joint bolts rubbing, need to do some adjusting. Other than that new set of tyres on the wheels and it's all upgrades from there on! 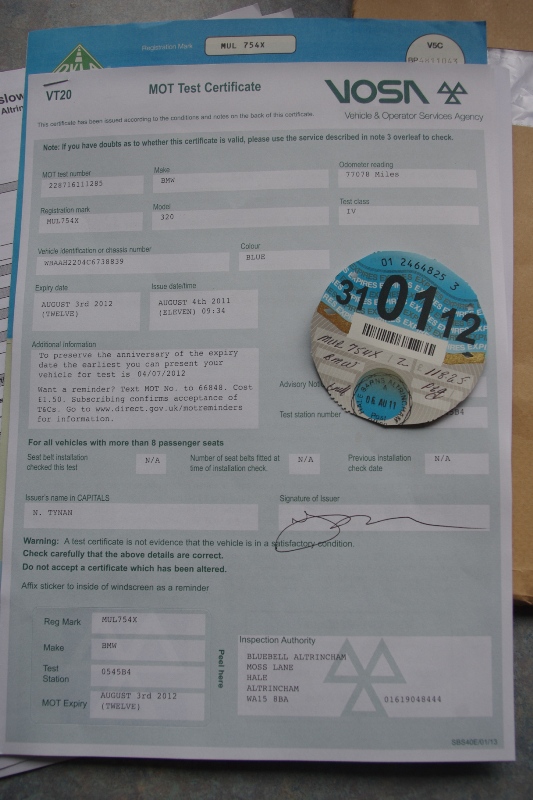 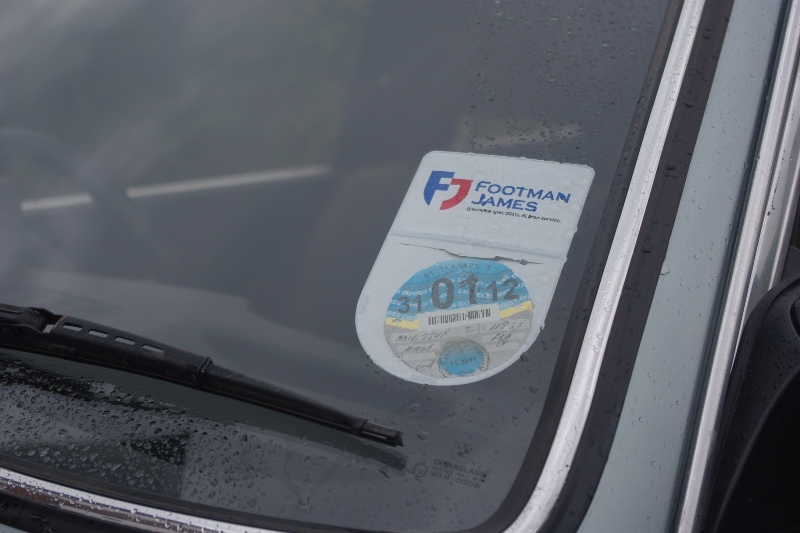 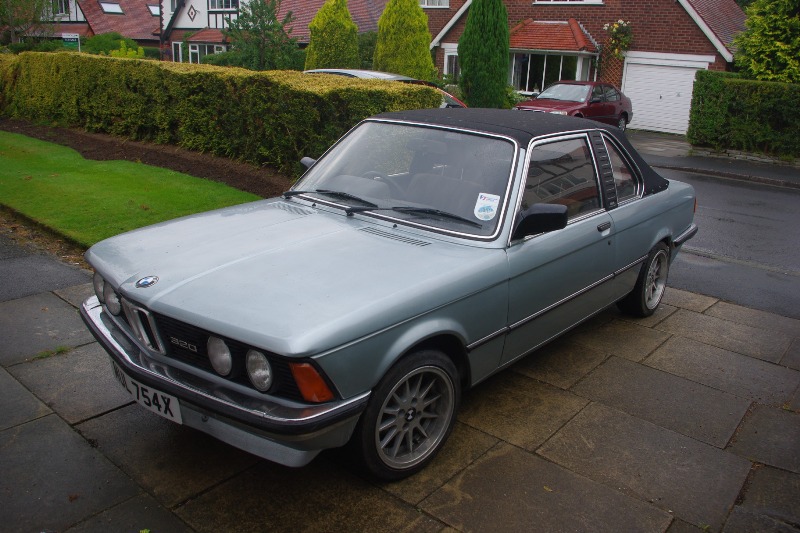 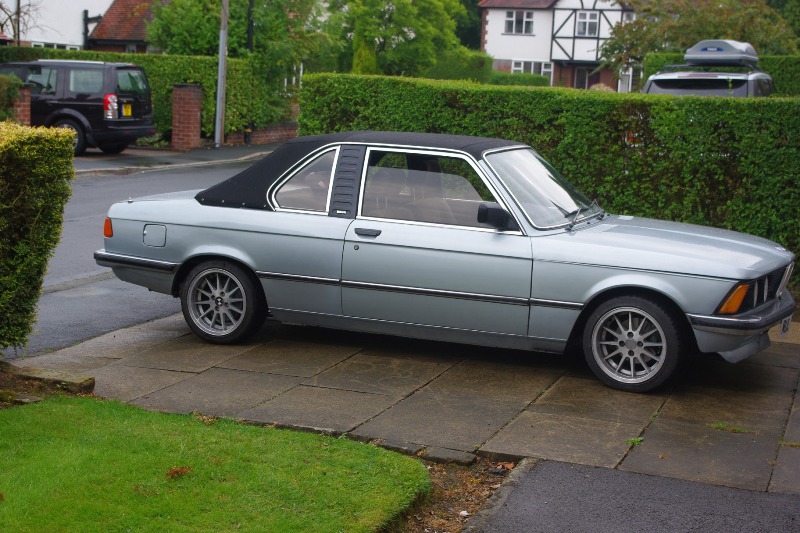 I'll get some better pics in due course, can't do closeups at the moment as the paint still needs buffing and a few touch ups.
1983 316 Pustergrun - track sluG!
1982 Saphirblau Baur 325i


The OSR tyre has gone flat - the tyres were on the slug at Croft when I spun and got stones rammed down between the tyre/rim on the offside, pretty goosed anyway. I have the 15" MSW's from Arshad (originally Jeroen's as I recall) which need new tyres (tyres are so perished I suspect they were Jeroens originally too!). Thinking of grabbing a new set from kwik fit/ats/national tomorrow, and sticking them on. The Toyo's that are on these MIMS at the moment have been horribly abused on track (even before the spinning type stuff) and don't seem to have much grip anyway, so I'll probably bin them as well!

The exhaust rubbing was actually the rear bracket having come unfastened, solved with an M10 nyloc nut.

Apart from that, stereo in today, need to find some screws to fit the speakers in and run the microphone wire for the bluetooth under the windscreen rubber edge. Seem to have a very slight oil leak around the front end.