TaylorGoesFast wrote: ↑Mon Nov 16, 2020 3:34 pm
The other issue is, I can't figure out how the rear of the sunroof panel is supposed to connect. I have it connected to the panel slider rail with those rods, but it doesn't seem to tilt when the sunroof itself does because the tabs on the sunroof panel don't hook over that roller. It's really frustrating because the headliner gets destroyed immediately when messing with this stuff.

What do you mean, the slidingpart of the headliner? That hooks on to the rear of the sunroof. At the sideThe two rods with the U bar in between jus slides, does not do anything, because it is de water drain when closed. Gets rain/washwater to the sides, where the drainholes are.

Be sure to test those. The two in the rear drain behind the chrome behind the side windows. The front two in rhe sills, which will guarantee rust inside the sills. So I recommend getting a lot of ML or a product like it inside those.

Ah oke. Undo the liner, slide it back. Put the roof in quarter open position (slidjng backwards, not tilting position, liner undone in the front, so it is able to slide apart from the roof. Than slide it forward, pulling it on the roof. Than click it in the square holes in the front. That should do the trick.
It's the man next door!

uwbuurman wrote: ↑Mon Nov 16, 2020 10:49 pm Ah oke. Undo the liner, slide it back. Put the roof in quarter open position (slidjng backwards, not tilting position, liner undone in the front, so it is able to slide apart from the roof. Than slide it forward, pulling it on the roof. Than click it in the square holes in the front. That should do the trick.

Slept on my sunroof disaster, did more thinking, and figured out where I had gone wrong.

Took it all apart and tried to massage my mangled pieces back into the correct shape. I believe the rails are too damaged to ever get working properly, but I was able to get the sun roof to go back in, be aligned, and even have the sunroof headliner installed correctly! It can't open, but it can at least tilt now and the headliner looks a lot better. I believe the sunroof doesn't want to slide back because the passenger side rail is too bent up to let the slider portion of the cable to push through it easily, and I also believe the "new" cable for that side is now stripped. Before the parts car goes, I'll try to pull ALL of the sunroof stuff out of it, then maybe purchase an actually NEW set of cables and try again.

It's wild that it took me 4 e30s and 2 e21s to finally understand these sunroof mechanisms. 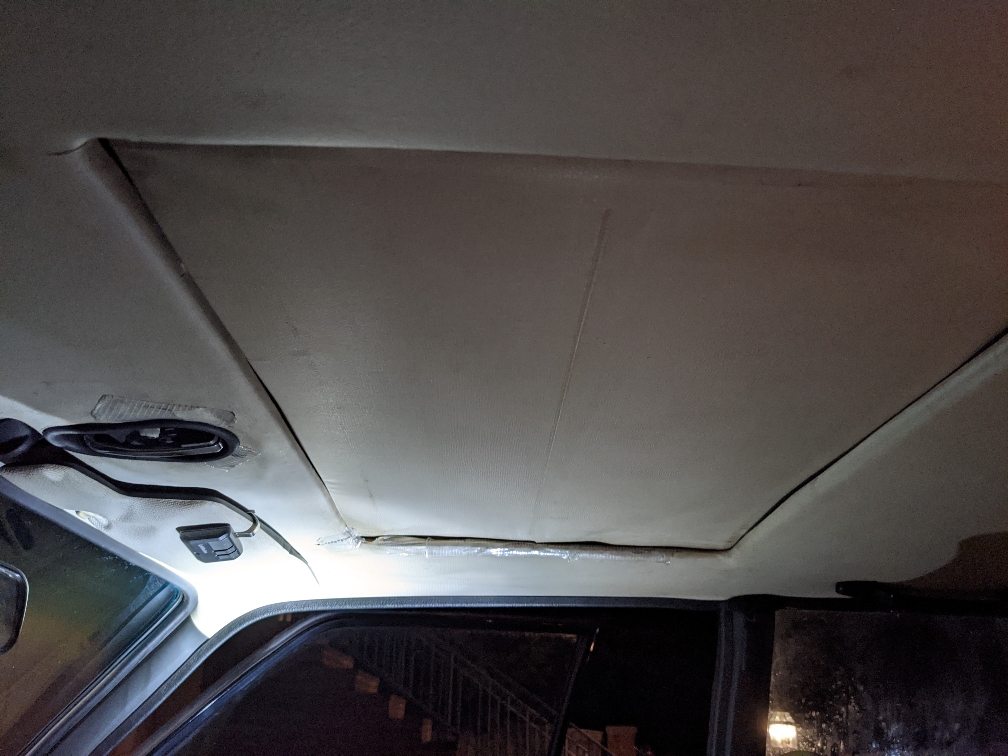 Made a low offer on a set of OE Sport Package wheels (13"x5.5"!!!!!!!) BBS wheels with good summer tires on them. Buyer accepted it and turned out he was in Richmond. I was already heading down to meeting a buyer for a transmission from VA beach and I also needed to pick up a free M3 bumper I was getting from someone, so the stars aligned and I knocked out all three in one round trip to Richmond this morning.

As I was walking out, I spotted one Recaro seat in the corner and inquired about it. Ended up getting that for a very good deal too! Now just to find one more seat and I'll have an almost complete 320is!

The Fiesta was completely packed on the way back. 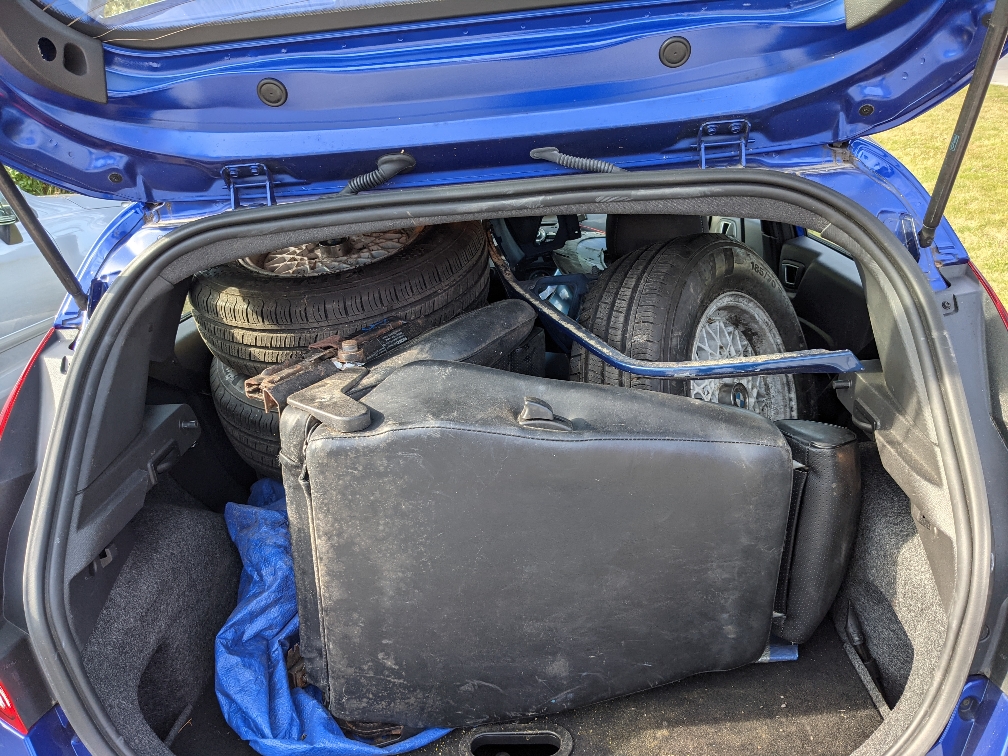 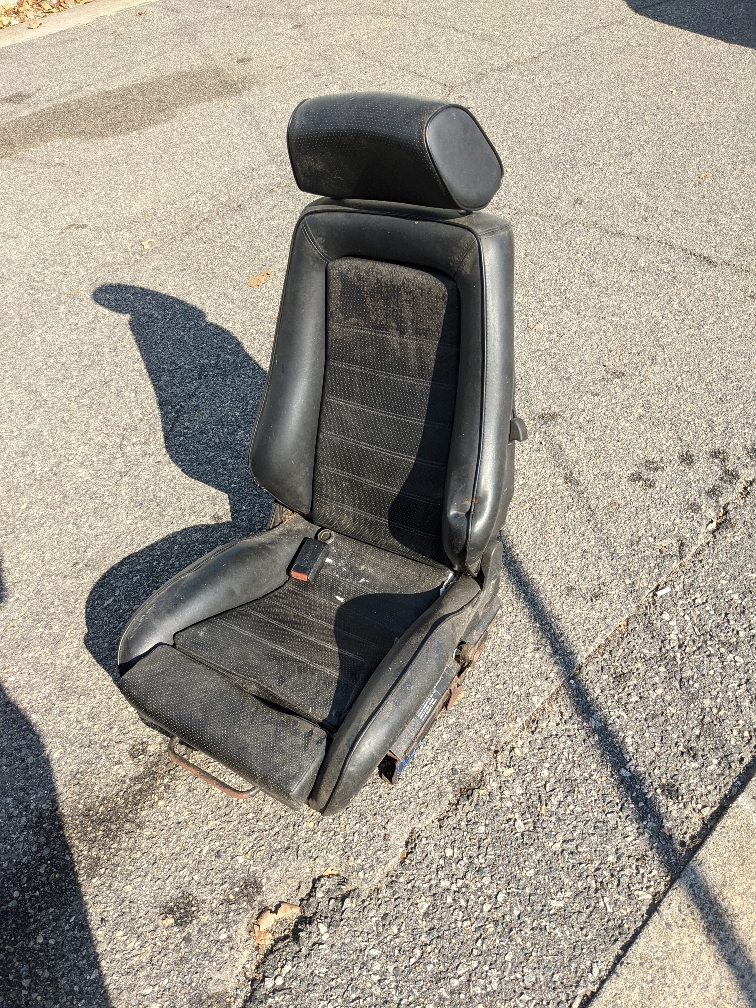 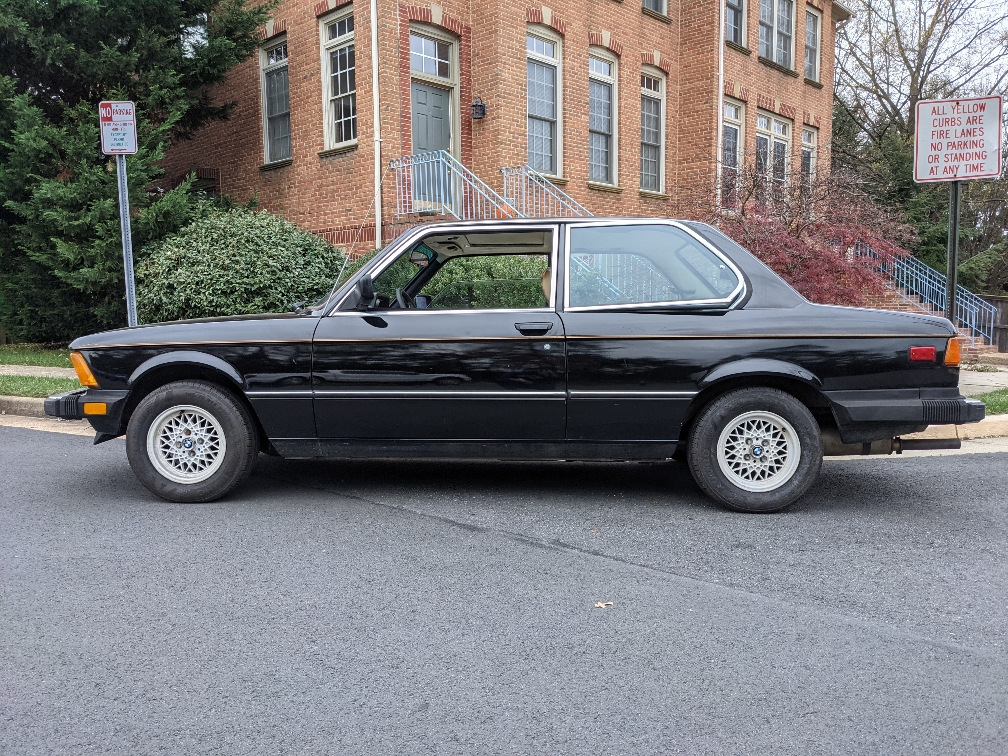 Nice find that Recaro, icing on the cake of your trip haha!
Regards/groeten, Jeroen

Sometimes all you need is a bit of luck

. Making some nice progress with Betty.

Having a parts car is so nice.

Swapped intake boot to one not shredded.

Ordered an owners manual from eBay for completeness.

Also bought a gas lid off of someone else doing a part out and now have good paint on the whole car. 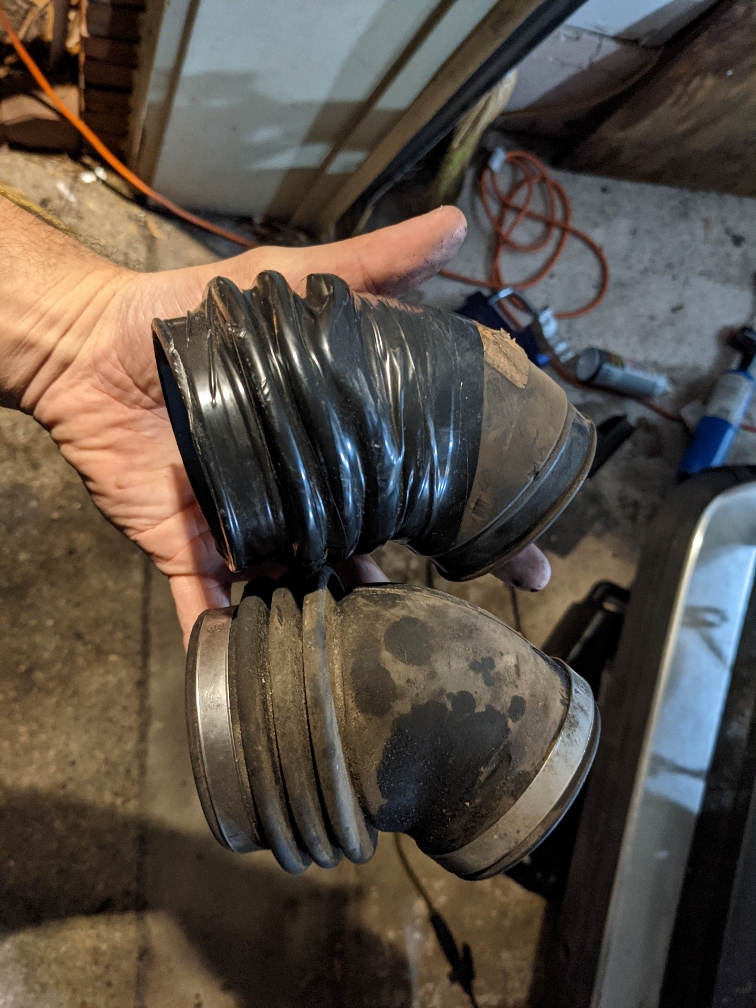 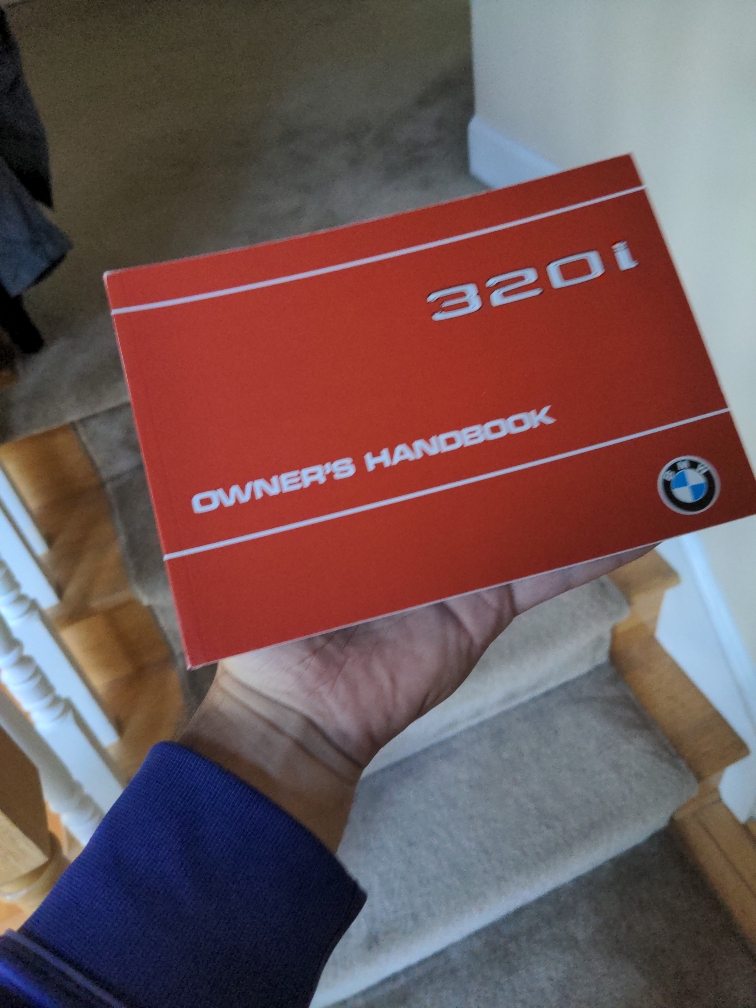 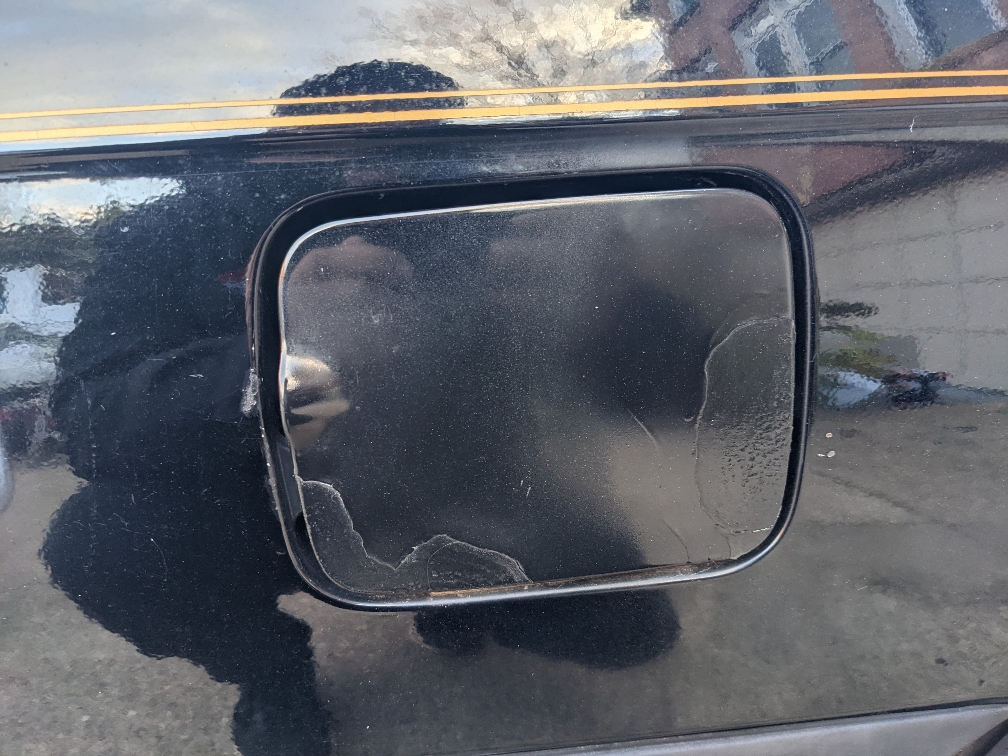 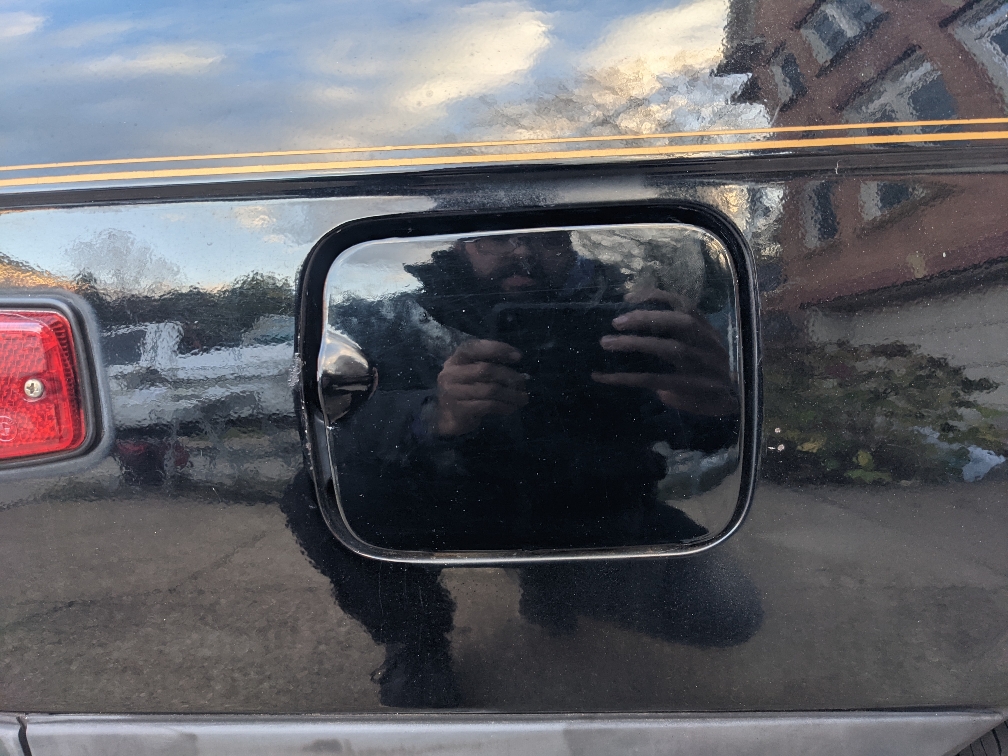 Engine is out of the parts car. About to start harvesting the fuel injection parts as the person buying the engine only wants the long block for his Weber converted e21. 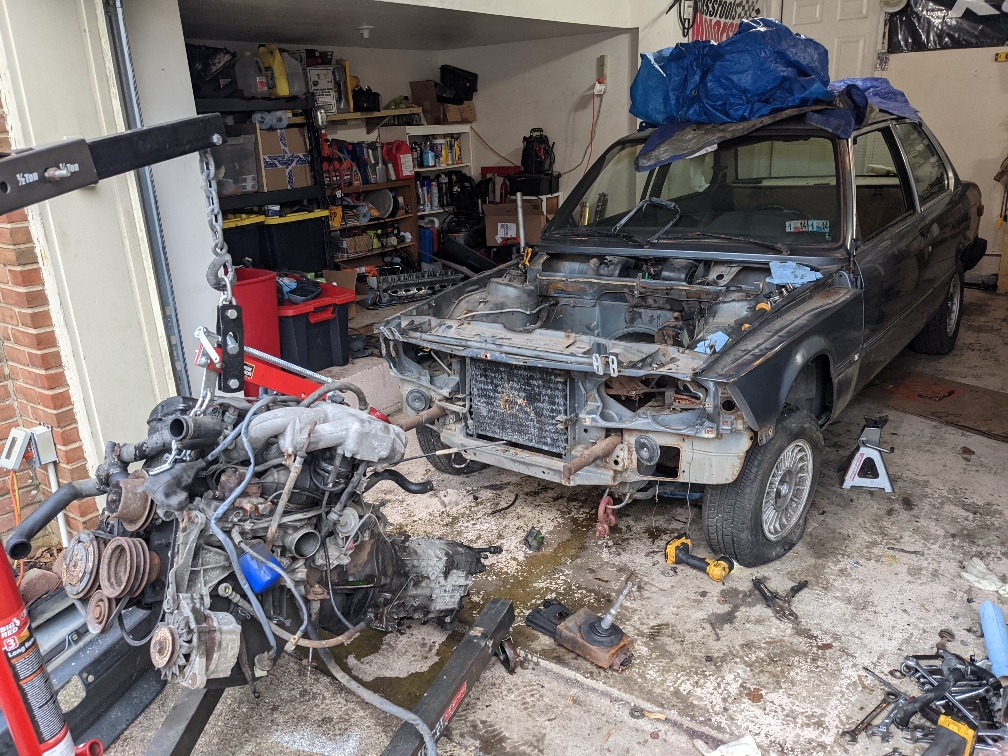 This car was originally optioned with fog lights (big deal!!) But did not have them installed when I bought it. It came with one fog light that was broken in the trunk. The parts car also has two fogs and one was broken. Took some time to piece together the good parts and got one fog light that works and one that doesn't, but both are complete (one is cracked) and they bolt right up. Got them wired up and the switch still works! I really love the look.

The OE bosch fogs are NLA right? So it's a bit of street cred to have these on there. 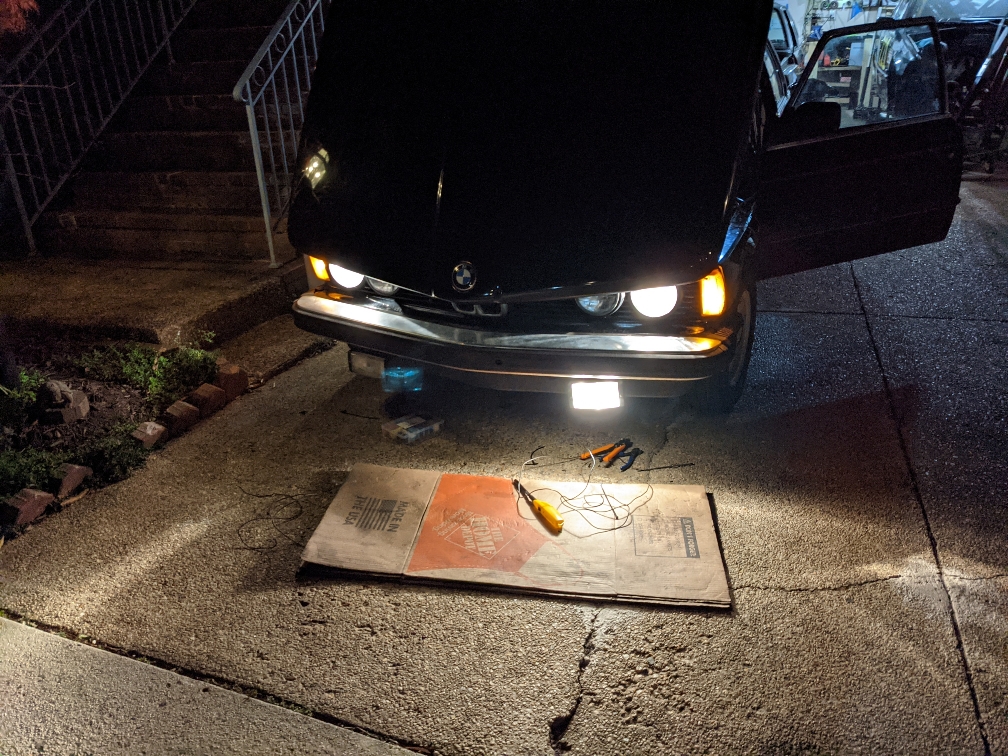 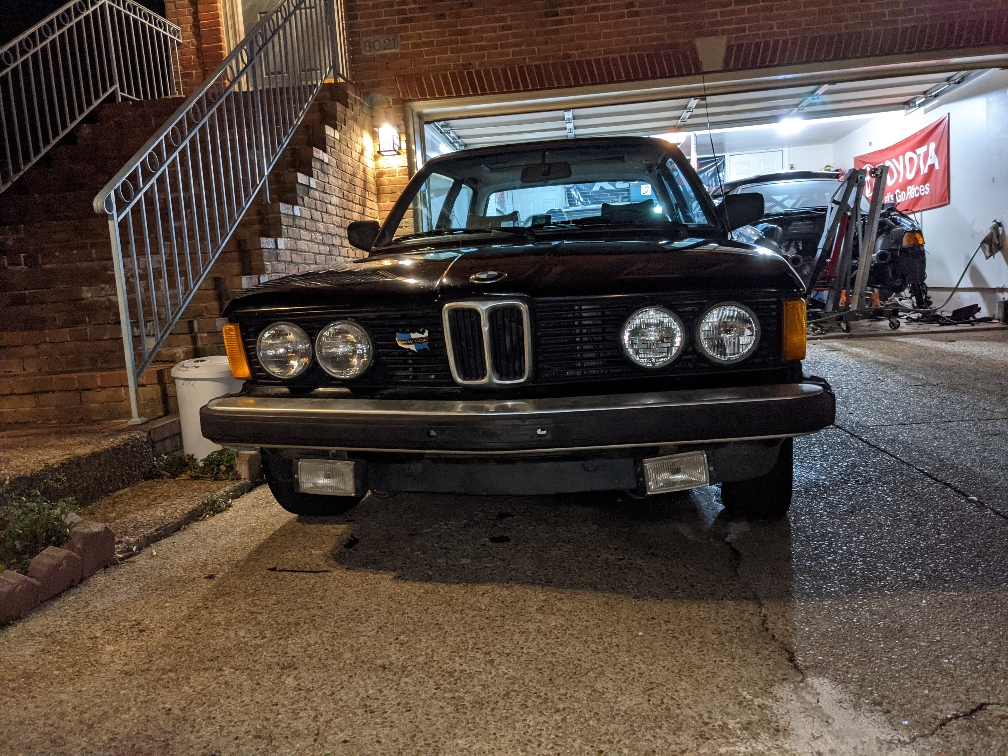 I take the E21 to cars and coffee about 40 minutes from my house every Sunday. I've made friends with another E21 guy out there and have been bringing him little parts he needs for his beautiful hennarot 320i. This weekend he returned the favor with some 323i trailing arms with disc brakes! I can't wait to get these installed. Later that day I took the E21 on a trip about an hour away to buy an E39 for my roommate (Tyler). The car did well the whole way back until I was 4 miles from home on a dark, narrow, steep hill with lots of traffic. Engine died halfway up a hill and I couldn't make it into any driveway and there was nowhere to turn off so I dumped it in a ditch and partially blocked traffic. I waited a while for traffic to die down and I rolled back down the hill and into someone's driveway. Knocked on the door of the house and explained my situation, and the lady's little puppy came out to see me, then peed on my shoes. I went back out to the car and started checking things and figured maybe the ignition module had died, so I asked Tyler if he could bring me a spare from the house (thanks parts car!). I posted on an E21 group asking for suggestions for things to check and someone suggested I check the fuel pump fuse. It seemed way too simple and I had overlooked it. Popped a new fuse in it and we were good to go. It's funny because I was checking voltages at each fuse the night before and noticed the fuel pump fuse was a newer style glass fuse and it was running pretty hot. I may clean up the contacts on all of the fuses and see if the car runs better. It seemed peppier, so I think the fuse may have had too much resistance and the fuel pump was not getting the amperage it needed. E21 adventures!
2011 F150
1995 BMW 325i Spec 3 Race Car
2008 BMW 128i 6 Speed Sport Package
1983 BMW 320i
2005 Kinetic SC
Top

Keep posting these stories, it's fun to read.

"Knocked on the door of the house and explained my situation, and the lady's little puppy came out to see me, then peed on my shoes"

Lucky it was just a fuse

Fully aggreed! My secretary is also called Betty, by the way. 323i trailing arms also require different handbrake cables. Replace the two bushings per arm, new set of discs, handbrakepads and pads and of you go!
It's the man next door!

Since I bought the car, it idled at 1500 and it was way more annoying than you can think. I'm not making a joke when I saw I had to turn my car off at the starbucks drivethrough to order my coffee before cars and coffee (lots of jokes to be made there). I had been hunting vacuum leaks and found none and my last resort was perhaps the oil pan gasket leak causing a loss of vacuum. I was doing some late night forum browsing last night and saw one post where someone claimed their idle screw didn't turn as far as they thought it should. That seemed relevant to me because I had cranked on mine and it seemed bottomed out. I went outside this morning and unscrewed my idle screw to find all kinds of crud and corrosion coming out of the threads as the screw came out. Then I saw the o-ring fall out in two pieces.

Parts car to the rescue once again! I pulled the idle screw out of the parts car intake, inspected and cleaned it, then cleaned out the screw hole on my car and reinstalled everything. The screw rotates much more freely now and I was able to get the idle down to 800rpm with no issue!

Fully aggreed! My secretary is also called Betty, by the way. 323i trailing arms also require different handbrake cables. Replace the two bushings per arm, new set of discs, handbrakepads and pads and of you go!

The trailing arms have new rotors and pads included, as well as the parking brake cables attached! Waiting until I decide which bushings to get before I replace them. Do subframe bushings need replacement on these cars like E30s and E36s or can I just get away with trailing arm and differential?
2011 F150
1995 BMW 325i Spec 3 Race Car
2008 BMW 128i 6 Speed Sport Package
1983 BMW 320i
2005 Kinetic SC
Top
Post Reply
61 posts