All you need to know on buying or maintaining an E21 is being gathered here!
Post Reply
13 posts • Page 1 of 1

Many times people claim to have found a rare gem in the shape of an E21 Alpina. To try and avoid future questions and give all some background info, here's a little writeup on E21 Alpina's. This info comes additional to the Alpina models page and the Alpina parts page.

Alpina started off tweaking the 4 cylinder M10 engines and offered better carbs, uprated fuel injection and fast cams on their A1-A4 conversions, as well as suspension mods. Several aerodynamic and vehicle trim options completed the package. These models were mostly regarded as slightly uprated BMW's and not as exclusive automobiles, that must be why there aren't many survivors of these models.

From 1978 Alpina only offered 6 cylinder models. The C1 2.3 was a stock 323i for the largest part (therefore many 323i's with some Alpina goodies added are offered as Alpina C1 as they look very similar, even in the engine bay). The engine has undergone modifications to pistons, camshaft and cylinder head to gain 30 BHP, but that's hard to see from the outside.

Then their top model B6 2.8. This had the 2.8 litre M30 engine from the E12 5-series fitted, an engine that was not available from BMW in the E21 shell. At first the B6's had the Zenith DL fuel injection and Hartig ignition fitted making it easy to distinct it from a stock M30 engine, but after reliability issues with this setup Alpina changed to L-Jet fuel injection making it again hard to distinct an Alpina engine from a stock example.

And there were more issues. Alpina did not only build their conversions themselves, they also allowed their dealers and importers to do conversions. Names like Garage du Bac in France, Heidegger in Zwitzerland and Oldenhof in The Netherlands built their share. And in most cases, no records were kept or they were lost over time. Alpina only has records on the B6 conversions they did themselves. On top of that partial conversions were performed and back in the days vehicle registrations were not as strict as they are now. So there are cars registered as Alpina C1 or 323i Alpina after only receiving a suspension upgrade and a front spoiler!

A lively trade in Alpina parts only adds, so the Alpina VIN plaque on the dash doesn't give any guarantees to name an example. All 'n all it appears there are more wannabe Alpina cars then there are real Alpina conversions these days so you better be careful in assuming you have a rare collector's car on hand. That's what makes this forum so useful: if you believe you found an Alpina (or any other rare conversion like from MK Motorsport, Schnitzer or Hartge), please post some details on the car and preferably some decent photos and the Alpina specialists may be able to tell you if it is likely that the car is a genuine Alpina. But in most cases the car in question is more likely to be a stock E21 or some kind of custom conversion with some Alpina ornaments added. You're warned.

Thank you Jeroen for the above. I have already the E21 316 5 speed which is a fabulous car to drive. I have now just bought in Australia a RHD 1981 Alpina C1 that has a dashboard plaque, Alpina engine bay plate as well as the usual items - wheels, decals, spoilers, badges etc. It also has an Australian compliance plate dated 3/81. According to the service book - delivery pre-inspection at BMW Munich in 5/81, then serviced in UK until mid 1983. The next service stamp is at Canberra Australia on 1/84. The owner, I suspect, was an Australian living in UK for a period of time but ordered the car with Australian compliance so as to import the car easily as he was moving back after completing secondment to UK. The original owner, i believe, was a Capt WB Atkinson based at Dorset signal baracks.
VIN Nbr: WBAAH3205B7252958
Engine Nbr 7252958

Sytner and BMW UK were no help on history.

I have written (and filled in their form - happy to pay 85 euros) to classic Alpina for any history they may have, but no response as yet.

PS Thinking of the all the Ukraine people.
Top

The C1's are always causing the most issues. Alpina did keep track of the production details of all B6's, but the C1's are a whole different story. Most of these were converted from 323i by local Alpina dealerships and many of these conversions were only partial and poorly recorded. So there is a chance Alpina has no details on the car at all, or can only provide a chassis or engine number. Apparently the car went straight to the UK, no documentation on a stop at Alpina, then it could be converted by Sytner at some point but with a pretty stamped service booklet I'd expect to find something about that in there.

The Alpina dash and engine bay plaques may be original, but the engraving isn't. It should say model and production number, for instance C1 - 244, see example below. Interior parts are limited to steering wheel and shift knob. As the C1's engine is based on the 323i's engine there's not much to see from the outside. A dyno test would be the easiest way to find out more about the engine.

I understand you are offering the car for sale at the moment but to be honest, at this point to me there is nothing that gives me the idea we're dealing with a C1 here, I'm sorry. On the other hand I have to compliment you on the condition of the car, and the extensive collection of high quality photos. Good luck with your sale. 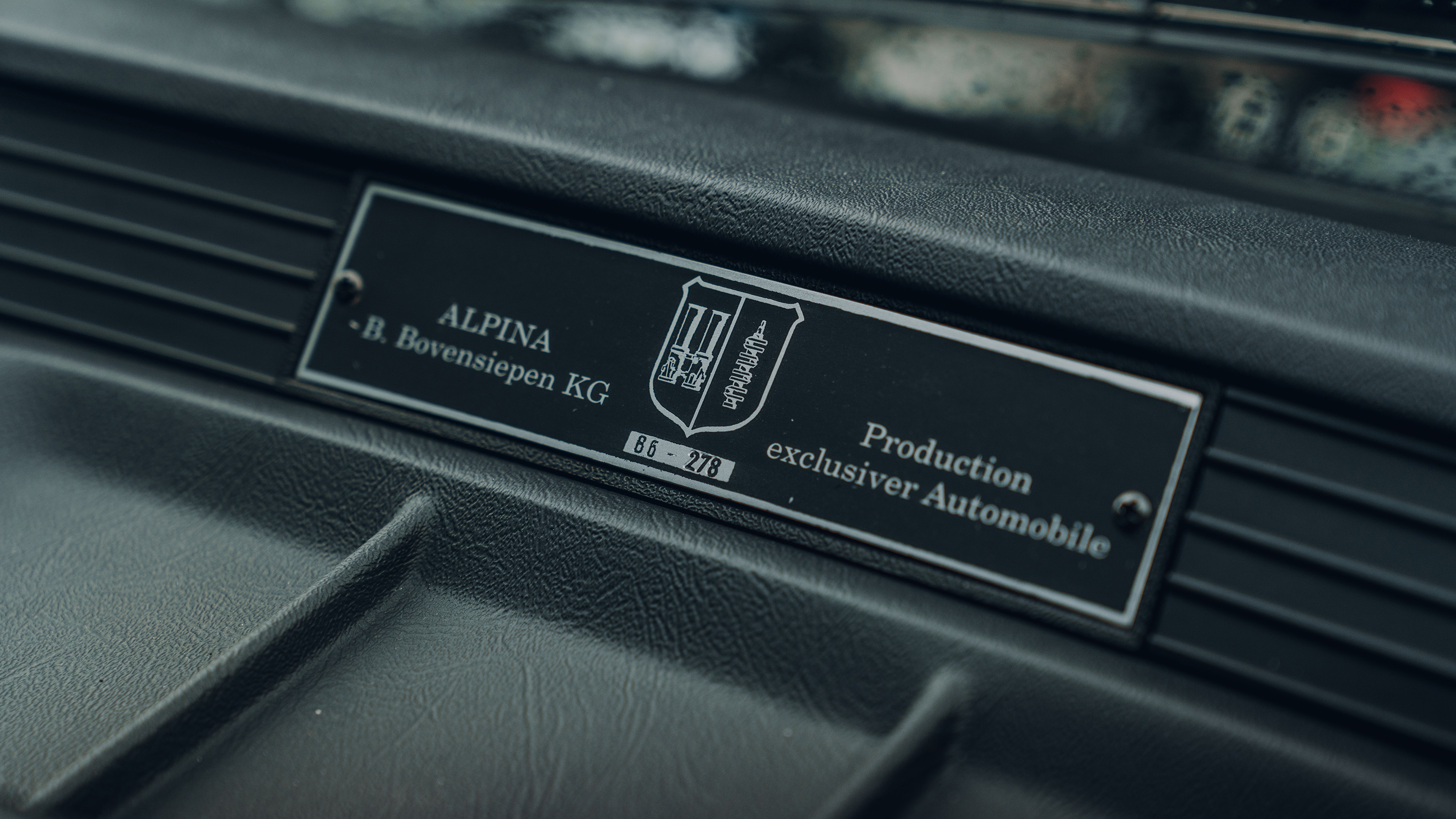 I'm terribly sorry but i agree with Jeroen's conclusion. nice tidy 323i with Alpina "Optic"

the list on the archive is below:
https://www.alpina-archive.com/?cat=706
i couldn't make out the build number- also the chassis plate seems to have incorrect font .
Regards
Topcat
Isle of Man Inverness
1980 BMW E21 Alpina B6 2.8
1991 BMW E30 Hartge H26
Top

in the paperwork you have for the car do you have the original invoicing for the Alpina conversion in period: that would certainly aid your case?
Regards
Topcat
Isle of Man Inverness
1980 BMW E21 Alpina B6 2.8
1991 BMW E30 Hartge H26
Top

Hi everybody
Thank you for the information above. Very helpful.
I am the new owner of the car. I bought it.
It requires a bit of work to achieve a roadworthy certificate.
I should have been clear. Apologies.

Yes, my research on the C1 does unveil a murky world of hopefuls and wanna bes.

Regardless, it is a cool car and I love it!

I must run off to work now. I will respond further later today.
Best Regards
Phil
Top

Phil, not a problem, it won't change our view on the car. Still, it is a well above average car with lovely Alpina looks, so let's keep ths positive and congratulate you on your new toy. Hope you will have many beautiful years, trips and loads of driving fun with it. I still very much love my E21!
Regards/groeten, Jeroen

Hi Jeroen
Thank you for the pump-up!

BTW, Classic Alpina responded overnight with diagrams on where to check on the engine block and head for any Alpina stampings.
The car is in NSW as I am having some work done on the car before flying up and driving back down to Melbourne.
I will ask the mechanic to check for any stampings and keep the forum informed.

The owner had also bought from overseas new front door cards, blue carpeting and Alpina material to recover the front seats. I will sort that out after the mechanical side is done. The mechanic I used to do the pre-purchase inspection just recently sold his E30 John Player Special so knew the car-type quite well and what to look for. Importantly, only minor surface rust on the front chassis rail! Excellent. It has a dog-leg box and he said the engine pulls strongly so should be quite a difference to the 316 I suspect.

I am well aware of people purporting cars to be things they are not.
A few years ago I had an Alfa TZ1 recreation. Beautiful car, but more of a race car than a daily or even weekend cruiser.
If you want to delve into the murky world of pretend/make-believe/barn-finds and misrepresentation that must be the magnum opus of cars.

Thanks for all the input. Greatly appreciated.
(I am going to learn how to post a picture!)

Fully agree, good examples are becoming hard to find thus expensive, but I fully agree, I love the amount of communication and driver involvement with E21 and E30, after these models that only went downhill imo.

BTW, if you'd like to share the info from Alpina on where to find which markings that would be most welcome. I do know they used to replace the original engine number but didn't know about markings on the head.

Ok....I am trying to copy pictures from my newly established imgur account.
Let's see if it works!

Almost hahaaha! You now tried to post the url of the page, what you need is the url of the image, usually with extension .jpg or .png
For example for the first image it is https://i.imgur.com/EDb7ma1.png then in between IMG brackets it shows as below.

BTW thanks for the diagram, one for the archives! 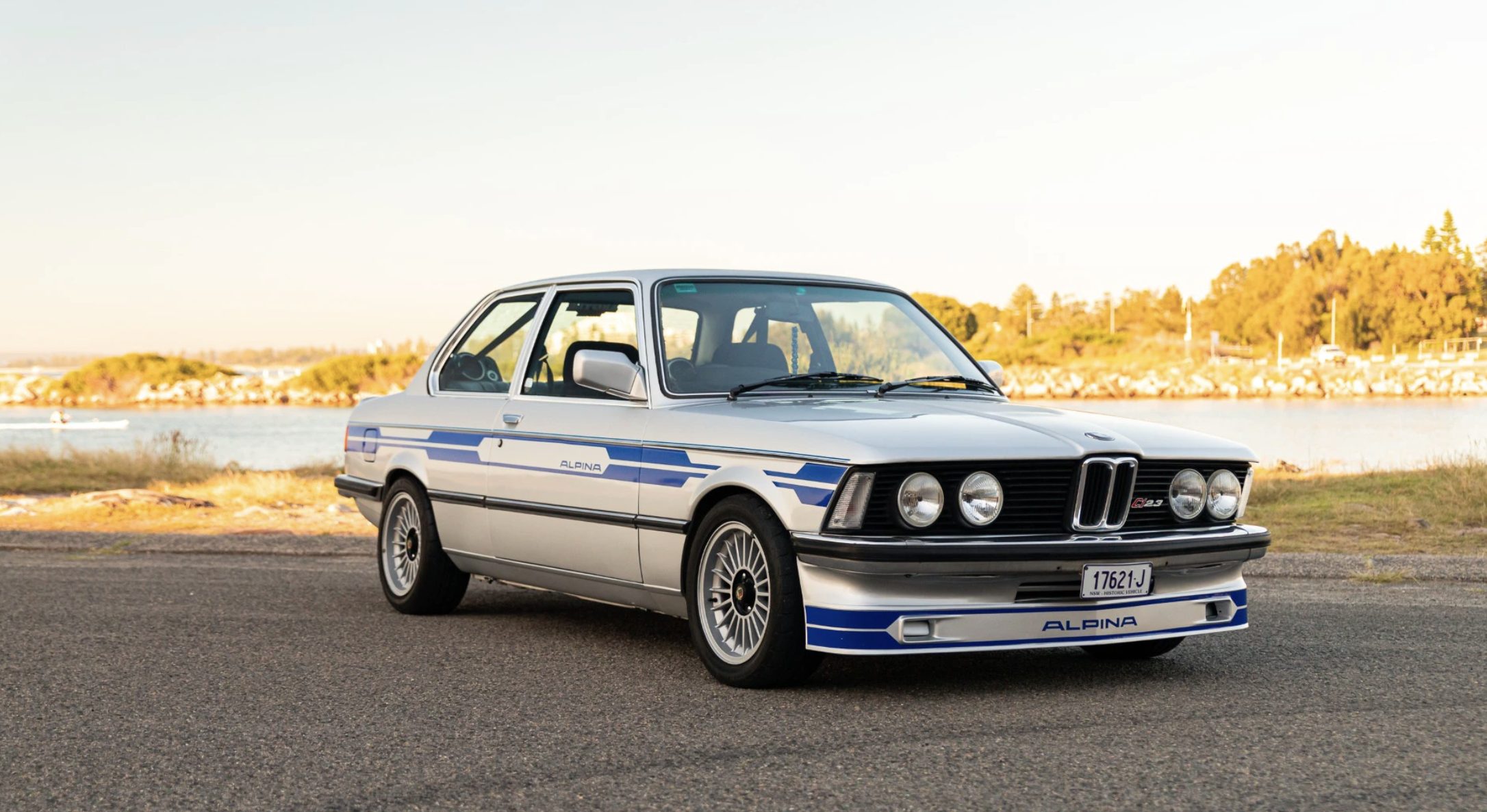 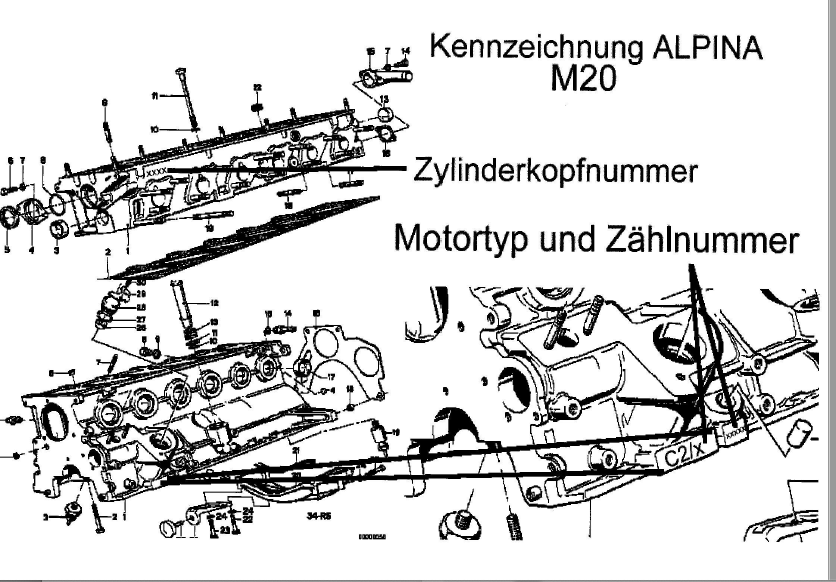